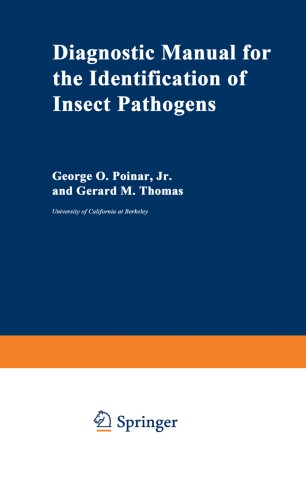 Diagnostic Manual for the Identification of Insect Pathogens

This manual was prepared for the diagnosis of insect diseases caused by infectious agents. The agents (or pathogens) included here are fungi, protozoans, bacteria, viruses, and rickettsias. The present work was prepared after much deliberation and discussion with students and teachers who felt a guide of this type would be valuable for diagnosing the microbial diseases of insects. It was modeled after a seminar given on the same subject at Berke­ ley, which had as its major goal the recognition and identification of insect pathogens for practical purposes. The present work in­ cludes numerous timesaving "short cuts" which were developed after years of experience of diagnosing insect diseases. Although emphasis is placed on identification, general back­ ground information on the various pathogens is also included. Thus, under each of the five groups of pathogens, the following topics are discussed: (1) various types of associations with insects, (2) defini­ tion and classification, (3) general life cycle, (4) characteristics of diseased insects, (5) factors affecting natural infections, (6) methods of examination, (7) isolation and cultivation, (8) important taxonomic characters, (9) tests for infectivity, (10) storage, (11) an illustrated key to the genera (or group in the case of viruses), and (12) literature, especially that pertaining to identification. Although often included with insect pathogens, entomogenous nematodes are not covered here since illustrated keys to those gen­ era that infect insects are already available (Poinar, 1975, 1977).