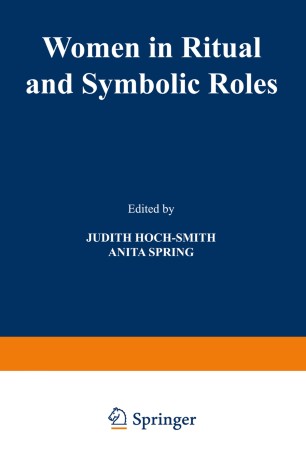 Women in Ritual and Symbolic Roles

This volume of essays grew out of a symposium organized by Judith Hoch-Smith and Anita Spring for the 1974 American Anthropological Association meetings in Mexico City. The two-part symposium was enti­ tled "Women in Ritual and Symbolic Systems: I. Midwives, Madonnas, and Mediums; ll. Prostitutes, Witches, and Androgynes. " The sym­ posium participants were asked to explore theological, ritual, and sym­ bolic aspects-both positive and negative-of the feminine cultural do­ main, using ethnographic materials with which they were familiar. The resulting papers have been revised, edited, and gathered together in Women in Ritual and Symbolic Roles. The theoretical importance of these papers for the study of women's participation in culture and society rests on the assumption that reli­ gious ideas are paramount forces in social life, that relationships be­ tween the sexes, the nature of female sexuality, and the social and cul­ tural roles of women are in large part defined by religious ideas. That this proposition remains valid long after religion itself has ceased to be a living truth in the lives of many people can be seen from the tenacious­ ness of Judeo-Christian ideas about women in the contemporary West­ ern world. Both the expansion of life options for women and the creation of more positive cultural images of the female are intimately related to changes in the my tho-symbolic portraits that people carry around in their heads. These portraits are almost exclusively constructed from mythological and religious conceptions inherent in all facets of culture.