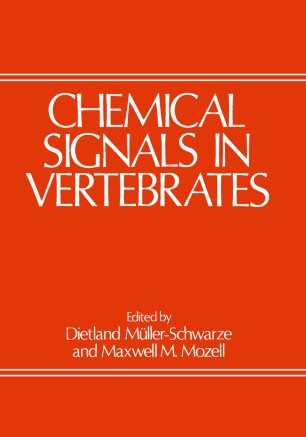 From June 6 to 9, 1976, about 140 participants (physiologists, chemists, ecologists, animal behaviorists, and psychologists) gathered in the Gideon Putnam Hotel at Saratoga Springs, New York for a symposium entitled "Chemical Signals in Vertebrates". The focus of this symposium, sponsored by the United States National Science Foundation, was on chemical communication in higher animals, most notably mammals. This included the chemical nature, production, and reception of chemical signals, and their modulating effects on behavior. Almost all the world's laboratories working in this area were represented. It was the first meeting of its kind, and although the physiological aspects of taste and smell on the one hand and insect pheromones on the other have previously been treated in several fine symposia, they have not before been treated as a back­ drop to chemical communication in vertebrates. The field of insect pheromones is well developed, with hundreds of active compounds identified. By contrast, in vertebrates only six mammalian phero­ mones in as many species had been identified chemically by 1976.