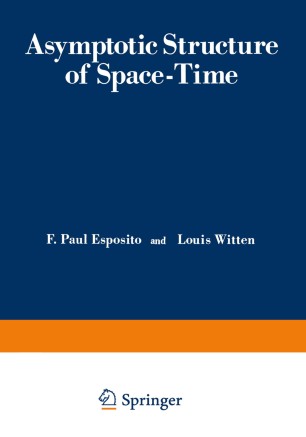 The Symposium on Asymptotic Structure of Space-Time (SOASST) was held at the University of Cincinnati, June 14-18, 1976. We had been thinking of organizing a symposium on the properties of "in­ finity" for several years. The subject had reached a stage of maturity and had also formed a basis for important current investi­ gations. It was felt that a symposium, together with a publication of the proceedings, would review, summarize, and consolidate, the more mature aspects of the field and serve as an appropriate intro­ duction to an expanding body of research. We had from the first the enthusiastic support and encouragement of many colleagues; with their cooperation and advice, the Symposium acquired its final form. These proceedings will attest to the value of the Symposium. The Symposium consisted of thirty lectures and had an attendance of approximately one hundred and thirty. The final impetus to our decision to go forward was the Bicen­ tennial Anniversary of the independence of our country. A most appropriate celebration on a University Campus surely is an intel­ lectual Symposium which pays honor to the histories and traditional purposes of a University. The Symposium was supported financially by the University of Cincinnatl Bicentennial Committee, the National Science Foundation, the Gravity Research Foundation, and by Armand Knoblaugh, Professor Emeritus of Physics of the University of Cincinnati.