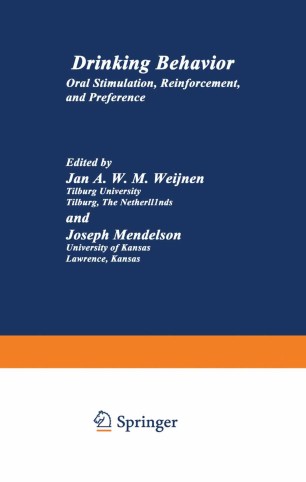 This is the first book that is devoted entirely to a discussion of the effects on drinking behavior of sensory stimulation of the tongue and mouth. As Blass and Hall (J 976) have recently pointed out, there has been an overrejection of the emphasis by Cannon (1932) and Hull (1943) on the peripheral origins (e. g. , dry mouth, empty stomach) of the control of ingestive behavior. Thus most present-day investigators of drinking behavior have been concentrat­ ing on central mechanisms of control, to the neglect of the periphery. In this volume we have attempted to bring together much of the pertinent "peripheral" literature through originally written chapters that are concerned with the role of orosensory factors in the mediation of drinking and licking. Postingestive effects of fluids receive little attention. Indeed, two chapters deal with consummatory licking in the absence of intake of fluids. A good understanding of the consequences of orosensory stimulation on licking and drinking behavior requires insight into the functional anatomy of the tongue and mouth, the characteristics of the licking response and the problem of recording of licking behavior. Several chapters deal with these subjects. It has not only been a pleasure but also a privilege to edit this volume. We have learned much from the expert treatment of the different aspects of licking and drinking behavior by the chapters' authors.