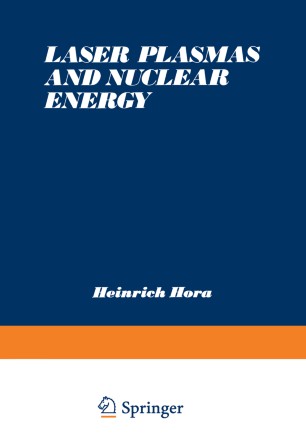 Most of this book was written before October 1973. Thus the statements concerning the energy crisis are now dated, but remain valid nevertheless. However, the term "energy crisis" is no longer the unusual new concept it was when the material was written; it is, rather, a commonplace expression for a condition with which we are all only too familiar. The purpose of this book is to point out that the science and technology of laser-induced nuclear fusion are an extraordinary subject, which in some way not yet completely clear can solve the problem of gaining a pollution-free and really inexhaustible supply of inexpensive energy from the heavy hydrogen (deuterium) atoms found in all terrestrial waters. The concept is very obvious and very simple: To heat solid deuterium or mixtures of deuterium and tritium (superheavy hydrogen) by laser pulses so rapidly that despite the resulting expansion and cooling there still take place so many nuclear fusion reactions tnat the energy produced is greater than the laser energy that had to be applied. Compression of the plasma by the laser radiation itself is a more sophisticated refinement of the process, but one which at the present stage of laser cechnology is needed for the rapid realization of a laser-fusion reactor for power generation. This concept of compression can also be applied to the development of completely safe reactors with controlled microexplosions of laser-compressed fissionable materials such as uranium and even boron, which fission completely safely into nonradioactive helium atoms.