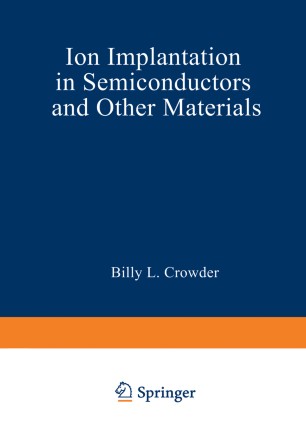 Ion Implantation in Semiconductors and Other Materials

During the years since the first conference in this series was held at Thousand Oaks, California, in 1970, ion implantation has been an expanding and exciting research area. The advances in this field were so rapid that a second conference convened at Garmisch­ Partenkirchen, Germany, in 1971. At the present time, our under­ standing of the ion implantation process in semiconductors such as Si and Ge has reached a stage of maturity and ion implantation techniques are firmly established in semiconductor device technology. The advances in compound semiconductors have not been as rapid. There has also been a shift in emphasis in ion implanta­ tion research from semiconductors to other materials such as metals and insulators. It was appropriate to increase the scope of the conference and the IIIrd International Conference on Ion Implanta­ tion in Semiconductors and Other Materials was held at Yorktown Heights, New York, December 11 to 14, 1972. A significant number of the papers presented at this conference dealt with ion implanta­ tion in metals, insulators, and compound semiconductors. The International Committee responsible for organizing this conference consisted of B. L. Crowder, J. A. Davies, F. H. Eisen, Ph. Glotin, T. Itoh, A. U. MacRae, J. W. Mayer, G. Dearnaley, and I. Ruge. The Conference attracted 180 participants from twelve countries. The success of the Conference was due in large measure to the financial support of our sponsors, Air Force Cambridge Research Laboratories and the Office of Naval Research.