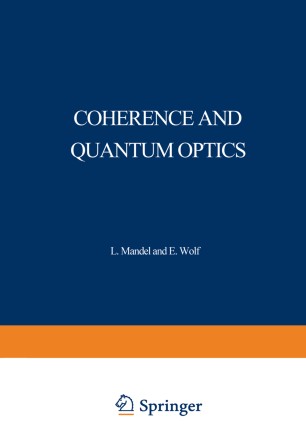 Proceedings of the Third Rochester Conference on Coherence and Quantum Optics held at the University of Rochester, June 21–23, 1972

This volume presents the written versions of papers that were delivered at the Third Rochester Conference on Coherence and Quantum Optics, held on the campus of the University of Rochester during the three days of June 21-23, 1972. The Conference was a sequel to two earlier meetings devoted to the same field of modern physics, that were also held in Rochester in 1960 and in 1966. The scope of the Conference was largely confined to basic pro­ blems in the general area of optical coherence and quantum optics, and excluded engineering applications that are well covered by other meetings. Approximately 250 scientists from 9 countries participated, most of whom are active workers in the field. Alto­ gether 72 papers, including 26 invited papers, were presented in 17 sessions. The papers dealt mainly with the subjects of resonant pulse propagation, lasers, quantum electrodynamics and alternative theories, optical coherence, coherence effects in spontaneous emis­ sion, light scattering, optical correlation and fluctuation measure­ ments, coherent light interactions and quantum noise. The program was organized by a committee consisting of N. Bloembergen (Harvard University) J. H. Eberly (University of Rochester) E. L. Hahn (University of California at Berkeley) H. Haken (University of Stuttgart, Germany) M. Lax (City College of New York) B. J. Thompson (University of Rochester) L. Mandel (University of Rochester) }J'oint secretaries E.