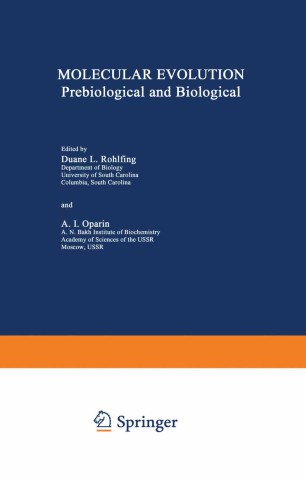 Formuch of his professional career, Sidney W. Fox has devoted his thought and research to studies of molecular evolution. MOLECULAR EVOLUTION: PREBIOLOGICAL AND BIOLOGICAL is a dedicatory vol­ ume of thirty-five contributed papers commemorating, on the occasion of his sixtieth birthday, his many achievements. The volume had its conception in the USSR (by AIO), had much of its development in the USA (by DLR) , and was made possible by the enthusi­ astic responses and enc·ouragements of fifty-eight contributors from ten nations and many disciplines. These numbers connote not only the es­ teem in which S. W. Fox is regarded, but also the international and in­ terdisciplinary nature of studies of molecular evolution. The term "molecular evolution" is often associated with abiotic or prebiotic evolution; it is also used to denote processes of biotic evolu­ tion at the molecular level. The point of merger of these two sub-areas, at "life," represents but one stage (albeit a very important one) in the total process of the evolution of matter, from hydrogen to Homo sapiens and beyond. This volume considers aspects of molecular evolution in this broader sense. Accordingly, the contributors include persons ex­ perienced in the prebiological and also the biological aspects of molecu­ lar evolution; several "outside" viewpoints are provided by persons whose principal interests lie in other diSCiplines. The contributions are both experimental and theoretical.