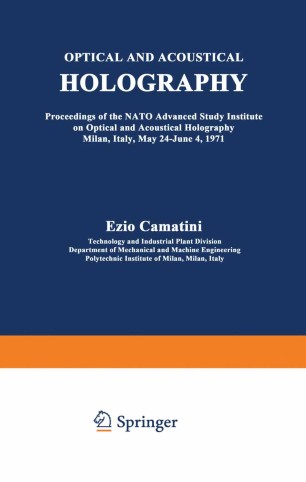 Proceedings of the NATO Advanced Study Institute on Optical and Acoustical Holography Milan, Italy, May 24–June 4, 1971

When Faraday performed the very first experiments on electromagnetic effects, which form the very foundation of modern civilization since virtually everything electrical utilizes them, he was asked of what use his experiments were. He is said to have replied: "What is the use of a baby?" That reply might also be given to those who asked what was the use of basic research which resulted in the development of the laser and holography. Brigadier General Leo A.Kiley, Commander, Office of Aerospace Research, USAF, in his remarks before the Society of Photo-Optical Instrumentation Engineers at the opening ceremony of the Seminar on Holography held at San Francisco, California, in May 1968, declared, "It has been said that in the twenty-first century at least half of the jobs that will exist then do not exist today. But be that as it may, I am sure that holography will be common­ place. " And later "Even in its embryonic state today, the concept of holography is providing real world applications to the scientific community and I feel that continued rapid growth can be predicted." Now, only three years after these statements, the development of holography is extraordinary on the scientific side and very promising from the point of view of proven and potential applica­ tions. Holography looks like an emerging technique, a valuable tool for engineers.