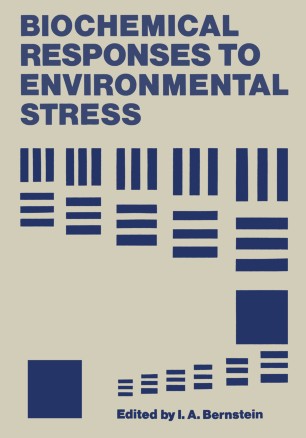 Proceedings of a Symposium sponsored by the Division of Water, Air, and Waste Chemistry, Microbial Chemistry and Technology, and Biological Chemistry of the American Chemical Society, held in Chicago, Illinois, September 14–15, 1970

In the world outside the laboratory, life goes on in a chang­ ing rather than in a constant environment and organisms must continually accommodate to changes in temperature, light, humidity, nutrition, etc. Since studies of the enzymatic process, in vitro, indicate that, in general, biological catalysis can proceed only over limited ranges of temperature, pH, substrate concentration, etc. , it seems reasonable to assume that biological systems have an ability to maintain a relatively constant internal milieu in the face of drastic external environmental change. This concept, as applied particularly to the mammal, was enun­ ciated by Bernard (1878) in the latter part of the last century. Cannon (1939) designated the phenomenon as homeostasis stating (cf Potter, 1970) that "in an open system such as our bodies represent, compounded of unstable material and subjected continually to disturbing conditions, constancy is in itself evidence that agencies are acting or are ready to act, to maintain this constancy. " He further proposed that "if a state remains steady, it does so because any tendency towards change is automatically met by increased effectiveness of the factor or factors which resist the change. " Considerable evidence (cf Prosser, 1958) suggests that homeo­ stasis is a general phenomenon which applies to all living things and at all levels of biological complexity. Survival in the face of environmental stress would seem to depend upon the ability of the organism to respond by appropriate biochemical modulations so as to maintain homeostasis.