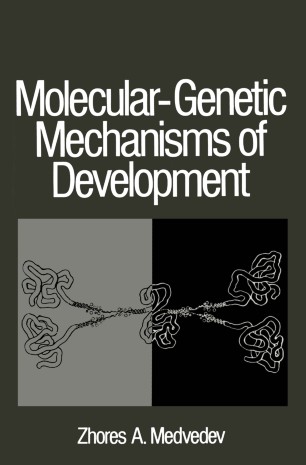 Although as part of my general plan, this book is a continua­ tion of my earlier monograph "Protein Biosynthesis and Problems of Ontogenesis,"* published in 1963, in all other respects it is an independent work. The earlier monograph was devoted to the analysis of many of the aspects of the problem of protein biosynthesis, and problems of inheritance and development were discussed only insofar as they are derivatives of the problems of biosynthesis. The complex act of protein biosynthesis, comprising autore­ production of the genetic material (DNA), formation of the templates of protein synthesis (messenger RNA), synthesis of amino acid carriers (transfer RNA), formation of ribosomes and polysomes, activation of amino acids, and so on, was examined in the previous monograph not merely from the standpoint of interaction between the components of this system, but also from that of their mani­ festation in actual biological systems during morphogenesis and aging of the organism. However, both morphogenesis and aging were investigated very generally, Simply as models, without any detailed analysis of their specific features and complexity. The present book is therefore a logical continuation of its prede­ cessor. It rests largely on a comprehensive analysis of the molecular-genetic and biochemical aspects of development and differentiation of living organisms, and questions of protein biosyn­ thesis are discussed briefly and generally, and only so far as is necessary for fulfillment of the primary task. • Zh. A. Medvedev. 1966. Protein Biosynthesis and Problems of Heredity. Developement.