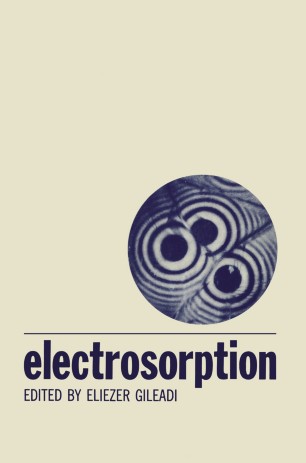 The gradual emergence during the last decade of the study of the mechanism of electrode reactions from the dark ages has given stimulus to a consideration of the double layer at metal-solution interfaces, which extends far outside the classical experimental studies of the capacitance of the mercury solution interface made during the 1950's by D. C. Grahame at Amherst College, Massachusetts. The central aspect of the study of an electrode reaction is the elucidation of its path and rate-determining step. Two fields are, however, prerequisites for such studies. First, it must be known what species are in the bulk of the solution, for these will seldom be simple ones such as H30~ and this study ("complex ions") has been made with both extent and depth. Second, the occupancy of the surface of the electrocatalyst and the associated field gradients must be known as a function of position in the double layer. Such "maps of the double layer" can be given with reasonable certainty up to concentrations of about 1 N for mercury in contact with solutions of inorganic ions. However, this is-or was until very recently-the extent of the know­ ledge. The problems confronting a fundamental approach to the rational development of, e.g., fuel cell catalysis were therefore considerable.