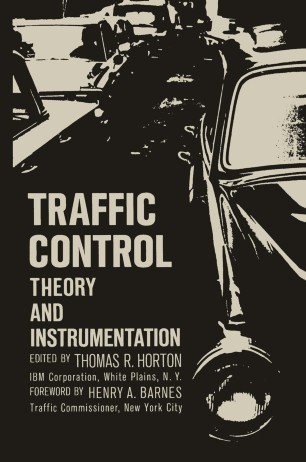 Theory and Instrumentation. Based on papers presented at the Interdisciplinary Clinic on Instrumentation Requirements for Traffic Control Systems, sponsored by ISA/FIER and the Polytechnic Institute of Brooklyn, held December 16–17, 1963, at New York City

At the close of the year 1900, motor vehicle registrations throughout the United States totaled 8000. These vehicles rode on unpaved and often dusty country roads. The only problem of traffic was an occasional pedestrian or a frightened horse or cow frenzied by the roar of this new creature. Today more than 82,000,000 registrations, representing 50% of the world's automobiles, are recorded in this country. In 1963 these vehicles traveled 798 billion miles over newly constructed modern highways, expressways, freeways, quickways, and thru­ ways, as well as improved rural and urban roads and streets. Out of all this has sprung the traffic engineer. Today's modern roadway is an engineering structure which has been developed through sound principles of design with provisions for safety and efficiency. An example of this safety factor can be found by the exacting specifications for cross sections, grades, roadside control, medians, and other design features. For many years, the responsi­ bility for controlling traffic fell naturally into the domain of the police. However, as traffic increased, many problems developed which were beyond the scope of normal police work. Since the highway system is an engineering structure which requires an engi­ neering approach to appraise operating problems and engineering techniques to solve them, the traffic engineer came into being.