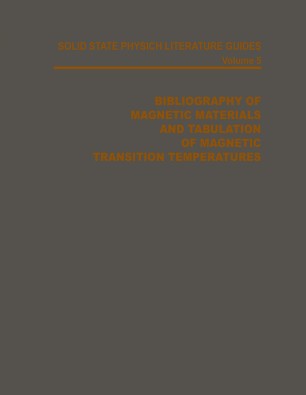 This referenced compilation of magnetic transition temperatures represents (with the Addendum) papers actually received by the RMIC through May 1972 and consists of two lists (alphabetical by compounds), one for Curie and one for Neel temperatures. Where different values appeared in the literature for a single compound, all are listed with sepa­ rate references given for each. There is no attempt at critical evaluation, which, except for a few welt-studied and well­ characterized materials, would hardly be worth the effort. All that one can say for most of the compounds is that for a given material with a certain (or all too often uncertain) history of preparati'on and treatment, stoichiometry, homoge­ neity, and chemical or structural purity a magnetic transition was indicated at the temperature(s) listed. Only when the reasons for different values are explicitly stated in the literature do they appear as brief comments in the body of the lists. In order to include the most recent data, and to eliminate the delay involved in recomposition of the lists, an addendum is provided. While this requires the perusal of two lists rather than one, it does ensure that the compilation represents the entire RMIC collection at the moment of going to press. The 2478 references are restricted to those papers specifying a Curie or Neel temperature and do not reflect the complete magnetics literature even for the materials listed.