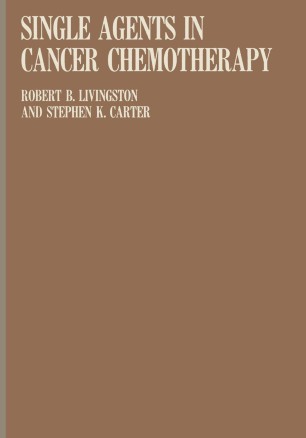 The clinical trials program of anti-tumor drugs was started by the National Cancer Institute in 1955. In the past 15 years, this national network has collected a large body of data on all of the recognized anti-tumor drugs as well as upon new, experimentally promising agents. While the most important of these studies have been published, there has remained a wealth of data not generally available to the scientific community. Drs. Carter and Livingston have not only succeeded in organ~z~ng this large corpus, they have in addition analyzed and interpreted the clinical data in a way that will be highly useful for years to come. From a perusal of this volume it becomes apparent that some drugs are more active against certain tumors than had been realized; that the evidence for the activity of certain drugs against specific tumors is sometimes tenuous; surprisingly, that some highly active agents have never been tried against some of the fairly common tumors. Their monumental work has provided not only access to the hard data, it has also shown the need for research to fill in important gaps in our knowledge. The authors and the IFI/Plenum Press are to be congratulated for this useful and important work. C. Gordon Zubrod, M. D. Scientific Director for Chemotherapy National Cancer Institute National Institutes of Health Bethesda, Maryland v Acknowledgment The authors wish to thank Dr. C. Gordon Zubrod and Dr.