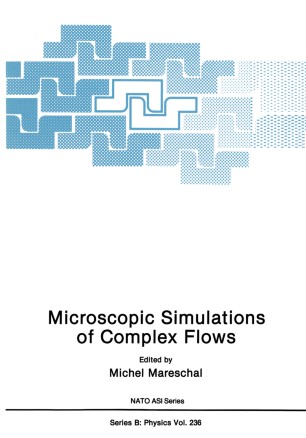 This volume contains the proceedings of a workshop which was held in Brussels during the month of August 1989. A strong motivation for organizing this workshop was to bring together people who have been involved in the microscopic simulation of phenomena occuring on "large" space and time scales. Indeed, results obtained in the last years by different groups tend to support the idea that macroscopic behavior already appears in systems small enough so as to be modelled by a collection of interacting particles on a (super) computer. Such an approach is certainly desirable to study situations where no satisfactory phenomenological theory is known to hold, or where solutions of the equations are too hard to obtain numerically. It is also interesting from a more fundamental point of view, namely the investigation of the limits of validity of the macroscopic description itself. The main technique used in bridging the gap between the macro and micro worlds has been the molecular dynamics simulations, that is the numerical solution of the equations of motion of the model particles which constitute the system under study, a gas, a liquid or even a solid. However, this technique is by no means the only one.