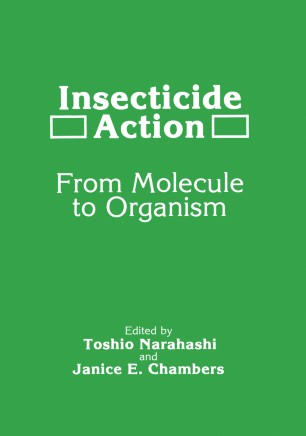 From Molecule to Organism

Intoxication of humans and animals has become increasingly important in recent years as has contamination of the environment by a variety of chemicals. In order to develop effective means by which such intoxication and contamination can be properly handled, it is imperative to know how these environmental agents act in humans and animals. Despite studies conducted by various investigators, the mechanisms of action of these environmental agents have not been fully elucidated. Insecticides are by no means an exception in terms of the seriousness of the problem and of the urgency of the need for such information. In order to complete a picture of the effects of any particular insecticide, it is of utmost importance that its actions at various levels ranging from those of molecules to whole animals be analyzed and synthesized. To understand the toxicological action on animals or humans, it is not sufficient to know the action at each level only. The actions at various levels must be integrated to construct a picture of the toxic effect on the intact organism. However, in spite of the large body of information that has been accumulated during the past few decades, little or no attempt has been made to integrate experimental data obtained at the molecular, cellular, organ, and animal levels together in order to define the whole picture of insecticidal action.