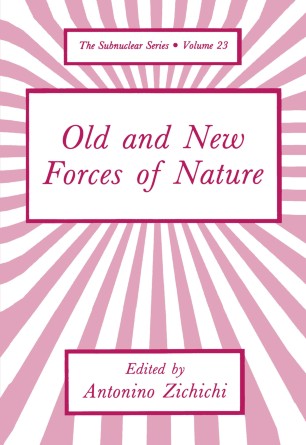 Old and New Forces of Nature

Part of the The Subnuclear Series book series (SUS, volume 23)

During August 1985, a group of 95 physicists from 61 laboratories in 24 countries met in Erice for the 23rd Course of the International School of Subnu­ clear Physics. The countries represented were: Algeria, Austria, Belgium, Brazil, Bulgaria, Czechoslovakia, France, the Federal Republic of Germany, India, Italy, Japan, Marocco, Norway, Pakistan, the Peoples' Republic of China, South Africa, South Korea, Spain, Sweden, Switzerland, Turkey, the United Kindom, and the United States of America. The School was sponsored by the European Physical Society (EPS), the Italian Ministry of Public Education (MPI), the Italian Ministry of Scientific and Technological Research (MRST), the Sicilian Regional Government (ERS), and the Weizmann Institute of Science. This year's programme was devoted to the key point of present times: do new substructures and therefore new forces of nature exist, in addition to the well-known ones? This key point was reviewed from the theoretical point of view, keeping both eyes open on the checking of theories versus experimental facts. This is way a large spectrum of basic experiments and theoretical works having their roots in the known fundamental forces, have been discussed in great detail by world specialists. I hope the reader will enjoy the book as much as the students enjoyed the School, and the most attractive part of it, the discussions sessions. Thanks to the scientific work these discussions have been reproduced as closely as possible to the real event.