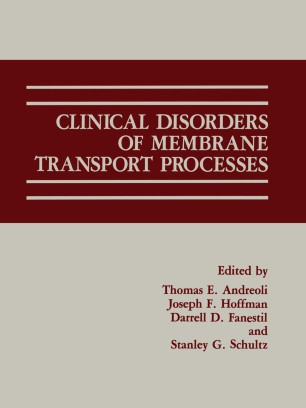 Clinical Disorders of Membrane Transport Processes is a softcover book containing a portion of Physiology of Membrane Disorders (Second Edition). The parent volume contains six major sections that deal with general aspects of the physiology of transport processes and specific aspects of transport processes in cells and in organized cellular systems, namely epithelia. This text contains the last section, which deals with the application of the physiology of transport processes to the understanding of clinical disorders. We hope that this smaller volume will be helpful to individuals particularly interested in clinical derangements of membrane transport processes. THOMAS E. ANDREOLI JOSEPH F. HOFFMAN DARRELL D. FANESTIL STANLEY G. SCHULTZ Vll Preface to the Second Edition The second edition of Physiology of Membrane Disorders represents an extensive revision and a considerable expansion of the fIrst edition. Yet the purpose of the second edition is identical to that of its predecessor, namely, to provide a rational analysis of membrane transport processes in individual membranes, cells, tissues, and organs, which in tum serves as a frame of reference for rationalizing disorders in which derangements of membrane transport processes playa cardinal role in the clinical expression of disease. As in the fIrst edition, this book is divided into a number of individual, but closely related, sections. Part V represents a new section where the problem of transport across epithelia is treated in some detail. Finally, Part VI, which analyzes clinical derangements, has been enlarged appreciably.