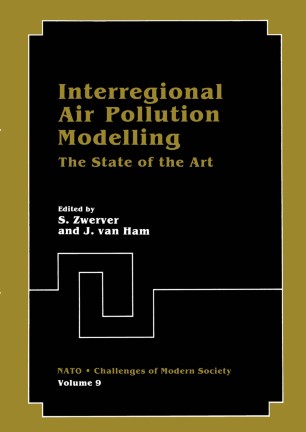 The State of the Art

The North Atlantic Treaty Organization (NATO) established the "Committee on the Challenges of Modern Society" (CCMS) at the November 1969 meeting of the North Atlantic Council. The CCMS was charged with developing meaningful environmen­ tal and social programs that complement other international pro­ grams, and with showing leadership, first, in solution of exist­ ing problems and, second, in development of long-range goals for environmental protection in the NATO sphere of influence and in other countries as well. A first Pilot Study on Air Pollution was initiated by the CCMS at its inaugural meeting in December 1969. It resulted in documents about the definition of criteria for the effects of air pollutants as well as the development of assess­ ment methods for air quality in urban areas. A second Air Pollution Pilot Study (1975-1979) worked out the basics for setting up assessment methods for emissions inven­ tories, techniques for the practical application of meteorologi­ cal diffusion models as well as the development of guidelines for an Air Quality Management System (AQMS). Within this second Air Pollution Pilot Study attention to modelling concentrated on the Gaussian Plume Model. A third Pilot Study on Air Pollution Control Strategies and Impact Modelling then was initiated in 1979 and started in 1980.