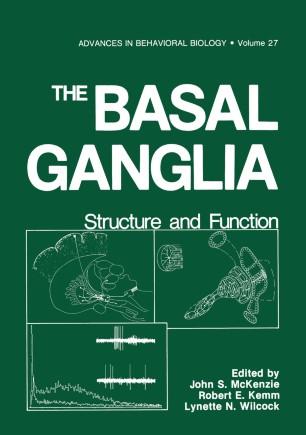 This volume arose out of the symposium: "The Basal Ganglia: Structure and Function," held at the beginning of September 1983 as a satellite of the 29th International Congress of Physiological Sciences. The symposium took place at Lorne, a village on the ocean 150km south-west of Melbourne in a former holiday guest-house situated beside the beach. The sounds of surf and winter rain on the iron roof provided a background to the proceedings. The symposium was a happy and productive event, among a small group of participants from twelve countries, undistracted by any competing activities in the out-of-season period. Over three days, there were formal papers with lively discussion, as well as posters displayed continuously and available for comment during coffee and lunch breaks. The more philosophical views on the basal ganglia were aired at informal evening discussions after dinner. At the symposium banquet on the final night, the participants voted to form the International Basal Ganglia Society (IBAGS); Malcolm Carpenter was elected Foundation President, with Richard Faull as Organizing Secretary. The book comprises papers prepared by participants after returning home, so that they had opportunities for incorporating fruits of symposium discussions. Some anticipated contributors were finally unable to participate, and a few who presented data preferred not to submit papers for the book.