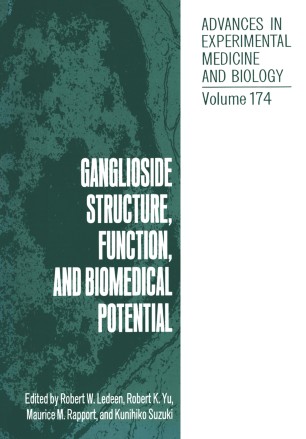 Part of the Advances in Experimental Medicine and Biology book series (AEMB, volume 174)

This volume contains the proceedings of the symposium on "Ganglioside Structure, Function and Biomedical Potential" which was held at Parksville, Vancouver Island, B. C. , Canada on July 6-10, 1983. The symposium was organized ao a satellite to the ninth meeting of the International Society for Neurochemistry, held immediately afterward in Vancouver City, B. C. Close to 50 speakers from 9 countries presented papers on a wide range of topics on the ganglioside theme. These encompassed the many aspects of basic research that have evolved over the past half-century, as well as some newer topics relating to the biomedical potential of gangliosides as therapeutic agents. One of the purposes of the meeting was to encourage dialogue between investigators in these seemingly diverse areas in the hope that each would come away with fresh perspective toward his own work. Judging from the many spirited, informed discussions that took place throughout the four­ day meeting, this goal was achieved. The charm and beauty of Vancouver Island undoubtedly contributed to the congenial atmosphere which quickly developed among the 120 or so participants. Drawn from 13 countries of Europe (East and West), America (North and South), Asia and the Middle East, this gathering reflected the broad geographical scale on which ganglioside research is now conducted. That this field is still in its "logarithmic" stage of growth is indicated by the increasing number of citations appearing each year in the various abstracts (e. g. fig. next page).