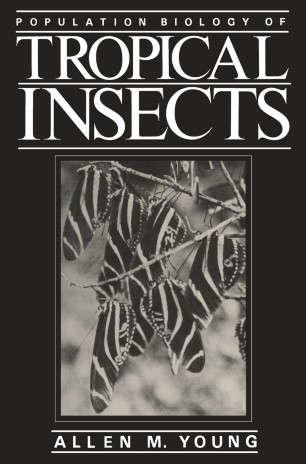 In this book I have tried to bring together the major developments in the study of insect populations in tropical environments. In some ways, this task has been a difficult one because conceptually it is virtually impossible to limit a discussion of insect ecology to the tropics, since the same concepts, theories, and hypoth­ eses concerning the mechanisms by which habitats support insect populations often apply both to temperate and to tropical regions. Thus one might argue effectively that a book such as Peter Price's Insect Ecology represents a more comprehensive treatment of insect ecology, including the tropical aspects. Yet because there has been a tremendous amount of new study on insects in the tropics in recent years, and because there has also been a strong historical interest in tropical insects, judging from early museum expeditions and medically and agriculturally oriented studies of insects in the New and Old World tropics, I believe there is a place for a book dealing almost exclusively with tropical insects. But logically so, such a book by necessity incorporates data and informa­ tion from Temperate Zone studies, if for no other reason than because insights into the properties of tropical environments often emerge from compariso'ns of species, communities, or faunas between temperate and tropical regions. An understanding of insect populations in the tropics cannot be divorced from a consideration of Temperate Zone populations.