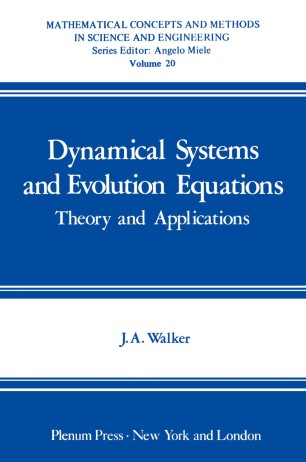 Part of the Mathematical Concepts and Methods in Science and Engineering book series (MCSENG, volume 20)

This book grew out of a nine-month course first given during 1976-77 in the Division of Engineering Mechanics, University of Texas (Austin), and repeated during 1977-78 in the Department of Engineering Sciences and Applied Mathematics, Northwestern University. Most of the students were in their second year of graduate study, and all were familiar with Fourier series, Lebesgue integration, Hilbert space, and ordinary differential equa­ tions in finite-dimensional space. This book is primarily an exposition of certain methods of topological dynamics that have been found to be very useful in the analysis of physical systems but appear to be well known only to specialists. The purpose of the book is twofold: to present the material in such a way that the applications-oriented reader will be encouraged to apply these methods in the study of those physical systems of personal interest, and to make the coverage sufficient to render the current research literature intelligible, preparing the more mathematically inclined reader for research in this particular area of applied mathematics. We present only that portion of the theory which seems most useful in applications to physical systems. Adopting the view that the world is deterministic, we consider our basic problem to be predicting the future for a given physical system. This prediction is to be based on a known equation of evolution, describing the forward-time behavior of the system, but it is to be made without explicitly solving the equation.