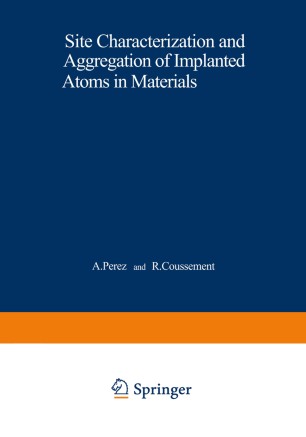 Site Characterization and Aggregation of Implanted Atoms in Materials

Explosive developments in microelectronics, interest in nuclear metallurgy, and widespread applications in surface science have all produced many advances in the field of ion implantation. The research activity has become so intensive and so broad that the field has become divided into many specialized subfields. An Advanced Study Institute, covering the basic and common phenomena of aggregation, seems opportune for initiating interested scientists and engineers into these various active subfields since aggregation usually follows ion implantation. As a consequence, Drs. Perez, Coussement, Marest, Cachard and I submitted such a pro­ posal to the Scientific Affairs Division of NATO, the approval of which resulted in the present volume. For the physicist studying nuclear hyperfine interactions, the consequences of aggregation of implanted atoms, even at low doses, need to be taken into account if the results are to be correctly interpreted. For materials scientists and device engineers, under­ standing aggregation mechanisms and methods of control is clearly essential in the tailoring of the end products.