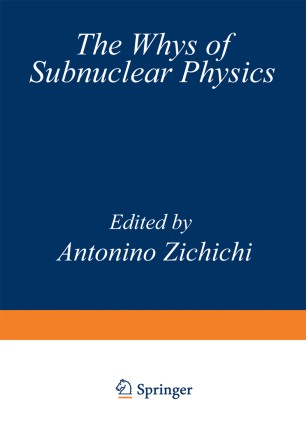 The Whys of Subnuclear Physics

Part of the The Subnuclear Series book series (SUS, volume 15)

From 23 July to 10 August 1977 a group of 125 physicists from 72 laboratories of 20 countries met in Erice to attend the 15th Course of the International School of Subnuclear Physics. The countries represented at the School were: Belgium, Bulgaria, Denmark, Federal Republic of Germany, Finland, France, Hungary, Ireland, Israel, Italy, Japan, the Netherlands, Norway, Poland, Sweden, Switzerland, the United Kingdom, the United States of America and Venezuela. The School was sponsored by the Italian Ministry of Public Education (MPI), the Italian Ministry of Scientific and Technologi­ cal Research (MRST) , the North Atlantic Treaty Organization (NATO), the Regional Sicilian Government (ERS) and the Heizmann Institute of Science. The School was very exciting due to the impressive number of frontier problems which were discussed. Being the 15th year of the School, it was decided to review all outstanding "Whys". At various stages of my work I have enjoyed the collaboration of many friends whose contributions have been extremely important for the School and are highly appreciated. I would like to thank Dr.A. Gabriele, Ms.S. McGarry, Mr. and Mrs. S. Newman, Ms.P. Savalli and Ms.M. Zaini for the general scientific and administrative work. Finally, I would like to thank most warmly all those ~n Erice, Bologna and Geneva who helped me on so many occasions and to whom I feel very much indebted.