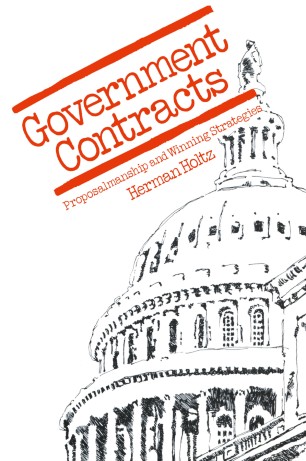 He who knows and knows that he knows is wise; follow him. -ANCIENT PROVERB During a long career of public service as a government procurement and contracting official, I am still surprised to find big, successful corporations making the same mistakes that neophytes in government contracting mak~. And this is particularly true in the matter of writing proposals, which are the crucial element in most major procurement awards. It's true enough, as many suspect, that the big, well-known company has something of an edge over the smaller, lesser-known company com­ peting for any given government contract-psychologically, at least: The typical government executives, whether contracting officials or program managers, tend to have a bit more faith in the ability of the large company to carry out the program successfully. All things being equal, then, the big company is more likely to get the nod. However, because the large companies are well aware of that, many tend to become "fat, dumb, and happy"-they try to coast or rest on their laurels. That is, they get careless about making a strong enough case for themselves in writing their proposals. And when they lose, often to smaller companies, they are both puzzled and outraged. They have for­ gotten that all government procurement is a competition-usually both technical and cost competition-and that the "little guy" can win against the "big guy," if he tries hard enough. And especially if the bigger guy is a bit careless and does not put out his best effort.