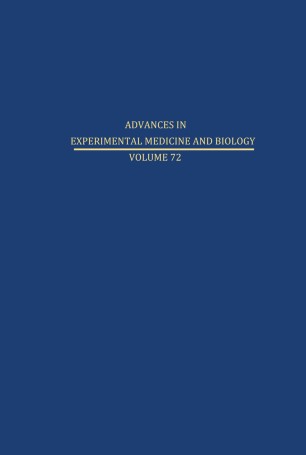 Part of the Advances in Experimental Medicine and Biology book series (AEMB, volume 72)

The present volume contains all the contributions and general discussion presented at the International Satellite Meeting on Func­ tion and Metabolism of Phospholipids in Central and Peripheral Nervous Systems held at Cortona, Tuscany, Italy in August 1975. The Satellite Meeting was organized on the frame of the 5th Inter­ national Congress of the International Society for Neurochemistry (Barcelona, 2-7 september 1975) and was just run before it. The publication of the scientific content of this volume has been made possible by the collaboration of the speakers, the discussants, the Meeting Chairman, the section chairmen and of all the scientists who have taken part at the Symposium and who deeply and actively discussed the lectures and the contributions to the General Discus­ sion which were delivered. In order to obtain rapid publication of the volume, however, the single discussions for each delivered contribution will not be reported here. The general subject of membrane structure, of the turnover of its lipid components in CNS and PNS, their functional implica­ tions and pharmacological actions, was explored in details from the stand-points of the various contributors in biophysics, biochem­ istry, physiology, cytology, pharmacology and pathology. The whole Symposium was effiCiently introduced and closed by Dr. W. Stoffel. The meeting has been thought to have been very successful.