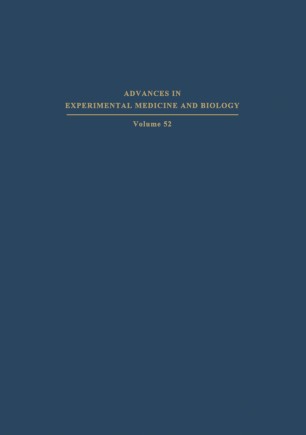 Part of the Advances in Experimental Medicine and Biology book series (AEMB, volume 52)

The International Symposium on Heparin, held May 13-15, 1974, in St. Louis, Missouri, as a part of the dedication of the Shoenberg Pavilion of the Jewish Hospital of St. Louis, was conceived as a forum to bring together physicians and scientists with a basic in­ terest in the structure, function and clinical usefulness of heparin. Few naturally occurring substances have commanded the breadth of interest among members of the biomedical research community as this compound has. Aspects of its covalent and three-dimensional struc­ ture, its biosynthesis, its interaction with and effect on physio­ logically important moieties and its use as a therapeutic agent in a variety of disease states have been actively studied for the past several decades. Thus, the present state of these studies seemed to be a timely subject for discussion, not only to gather together in one place representative samples of the myriad of data on heparin but also to underscore the ever increasing necessity for communica­ tion between basic research and clinical practice.