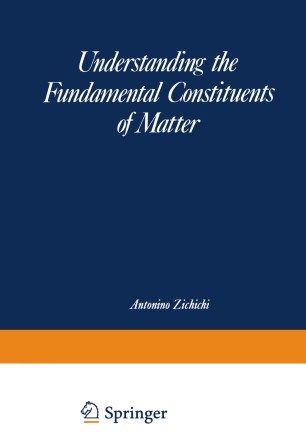 Understanding the Fundamental Constituents of Matter

Part of the The Subnuclear Series book series (SUS, volume 14)

During July and August of 1976 a group of 90 physicists from 56 laboratories in 21 countries met in Erice for the 14th Course of the International School of Subnuclear Physics. The countries represented were Argentina, Australia, Austria, Belgium, Denmark, the Federal Republic of Germany, France, the German Democratic Republic, Greece, Israel, Italy, Japan, Mexico, Nigeria, Norway, Sweden, the United Kingdom, the United States of America, Vietnam, and Yugoslavia. The School was sponsored by the Italian Ministry of Public Education (MPI), the Italian Ministry of Scientific and Technological Research (MRST), the North Atlantic Treaty Organi­ zation (NATO), the Regional Sicilian Government (ERS), and the Weizmann Institute of Science. The program of the School was mainly devoted to the elucida­ tion and discussion of the progress achieved in the theoretical and experimental understanding of the fundamental constituents of matter. On the theoretical front we had a series of remarkable lecturers (C. N. Yang, S. Weinberg, G. C. Wick) attempting a description of finite size particles. Another group of lecturers covered such topics as the understanding of the new particles (H. J. Lipkin), whether or not jets really exist (E. Lillethun), and the unexpected A-dependence of massive dileptons produced in high-energy proton-­ nucleus collisions (J. W. Cronin). Two other outstanding questions were covered by E. Leader and G. Preparata respectively: whether strong interactions are still within the Regge framework, and if it is really possible to master strong interactions. A. J. S.