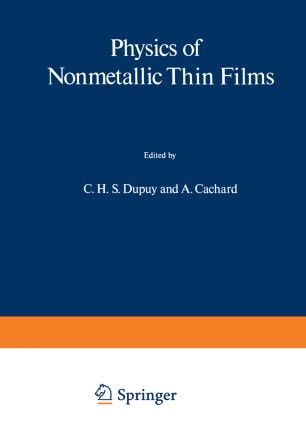 For several years now the intense development in the field of microelectronics, the interest in coating materials, and activity in integrated optics have produced many advances in the field of thin solid filmg~ The research activity has become so intensive and so broad that it is necessary to divide the field into metallic and non metallic thin films. A summer school in the area of non metallic thin films appeared to be a very fruitful concept and, hence, in October, 1973, A.S.l.M.S. made a proposal to N.A.T.O to hold this second summer school in Corsica in September 1974. The basic idea behind this summer school was essentially to stress and synthesize physical properties and structure of non metallic thin films. The main reason for this was the feeling that many laboratories are very specialized and that few engage in both physical and structural analysis of these films. The program included a large section on' physical studies: electrical (transport, interface effects, switching), mechanical and optical. There was also a large section o~characterization, crystal structure, chemical composition (stoichiometry is always a difficult problem), bonding and electronic structure.