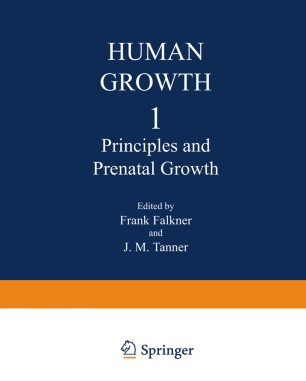 Growth, as we conceive it, is the study of change in an organism not yet mature. Differential growth creates form: external form through growth rates which vary from one part of the body to another and one tissue to another; and internal form through the series of time-entrained events which build up in each cell the special­ ized complexity of its particular function. We make no distinction, then, between growth and development, and if we have not included accounts of differentiation it is simply because we had to draw a quite arbitrary line somewhere. It is only rather recently that those involved in pediatrics and child health have come to realize that growth is the basic science peculiar to their art. It is a science which uses and incorporates the traditional disciplines of anatomy, physiology, biophysics, biochemistry, and biology. It is indeed apart ofbiology, and the study of human growth is a part of the curriculum of the rejuvenated science of Human Biology. What growth is not is aseries of charts of height and weight. Growth standards are useful and necessary, and their construction is by no means void of intellectualchallenge. Theyare a basic instrument in pediatric epidemiology. But they do not appear in this book, any more than clinical accounts of growth disorders. This appears to be the first large handbook-in three volumes-devoted to Human Growth. Smaller textbooks on the subject began to appear in the late nineteenth century, some written by pediatricians and some by anthropologists.