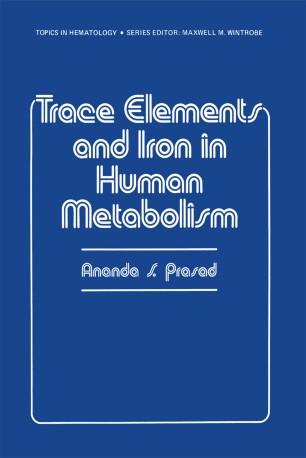 Part of the Topics in Hematology book series (TOHE)

Each year, it becomes more apparent that trace elements play an important role in human metabolism. The concept is no longer new. The literature on the subject is voluminous. Dr. Prasad, who has been interested in this field for many years, has undertaken the enormous task of bringing our knowledge together in a comprehensive fashion. This monograph should prove very informative and extremely useful to everyone who is concemed with human disease and with the maintenance of good health. His coverage of the subject is broad. Because ofthe importance of iron, in addition to "trace" elements, in human metabolism and nutrition, a chapter dealing with iron has been included. Maxwell M. Wintrobe, M.D. vii PREFACE It has been known for several decades that many elements are present in living tissues, but it was not possible to measure their precise concentra­ tions until recently. They were therefore referred to as occurring in "trace" amounts, and this practice led to the use of the term "trace elements." Although techniques now available are such that virtually alI trace elements can be determined with reasonable accuracy, the designation "trace ele­ ments" remains in popular usage.