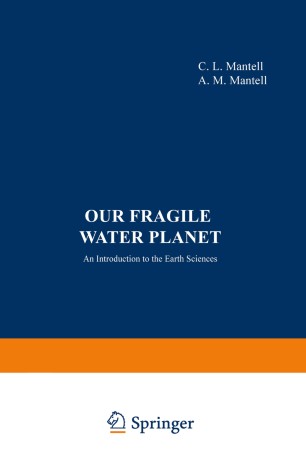 An Introduction to the Earth Sciences

This volume is an introduction to the study of the earth sciences, a multitude of the earth's composition; geology, which embraces geochemistry, the science the science of the earth's structure; meteorology and climatology, the study of both local and planetary weather; tectonics, the fledgling science of the move­ ment of sections of the earth, of earthquakes, and of volcanoes; biology and agricultural engineering; the water cycle and reclamation; the chemistry of the atmosphere and the origin of the changes it undergoes; the seas, the oceans, or oceanography; beach movement and deserts; hydrology, the science of water from the viewpoint of the sources of energy; pressure and temperature effects; the crust or lithosphere; the hydrosphere, or water areas; the atmosphere, winds, weather, hurricanes, and cyclones, as well as the technology of tracking them; the interfaces of the sections of the planet, and the uses of the earth by its peoples. The human race has developed on the crust and at the interfaces of the land, air, and sea of an unstable planet - a dynamic geological entity whose thermal equilibrium is still millions of years away. The crust of the earth in its movement and cracking evolves earthquakes and volcanoes which are destructive of human work and limit our habitation. Over the last 1500 years, earthquakes have killed as many people as now inhabit the planet, and fifteen times the present U. S. population.