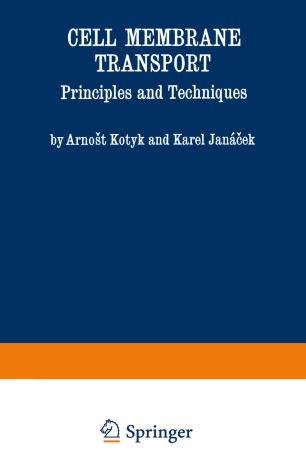 It is not a particularly rewarding task to engage in writing a book on a subject which is undergoing a rapid and potentially revolutionary develop­ ment, but, on the other hand, the investigation of transport of substances into and out of cells has reached a stage of maturity or at least of self­ realization and this fact alone warrants a closer examination of the subject. No one will doubt at present that the movement-mostly by selective translocation-of substances, ranging from hydrogen ions to deoxyribo­ nucleic acids, across the cell-surrounding barriers represents one of the salient features of a living cell and that, if we are permitted to go so far, the cessation of the selective transport processes might be considered as the equivalent of cell death. Hardly anybody will question the premise that cell and tissue differentiation within the ontogenetic development of an organism is closely associated with properties of the outer cell face. Perhaps no serious scholar will attempt to refute the concept that mem­ branes with characteristic morphology and composition represent the ar­ chitectural framework for the whole cell. And probably no experienced biologist will raise objections to the belief that many physiological processes, like nervous impulse conduction and other electrical phenomena of cells and tissues or their volume changes, are associated with membrane-regulated shifts of ions and molecules.