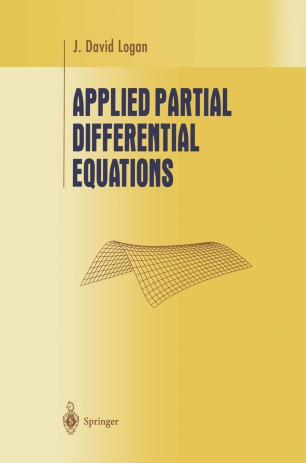 This textbook is for the standard, one-semester, junior-senior course that often goes by the title "Elementary Partial Differential Equations" or "Boundary Value Problems;' The audience usually consists of stu­ dents in mathematics, engineering, and the physical sciences. The topics include derivations of some of the standard equations of mathemati­ cal physics (including the heat equation, the· wave equation, and the Laplace's equation) and methods for solving those equations on bounded and unbounded domains. Methods include eigenfunction expansions or separation of variables, and methods based on Fourier and Laplace transforms. Prerequisites include calculus and a post-calculus differential equations course. There are several excellent texts for this course, so one can legitimately ask why one would wish to write another. A survey of the content of the existing titles shows that their scope is broad and the analysis detailed; and they often exceed five hundred pages in length. These books gen­ erally have enough material for two, three, or even four semesters. Yet, many undergraduate courses are one-semester courses. The author has often felt that students become a little uncomfortable when an instructor jumps around in a long volume searching for the right topics, or only par­ tially covers some topics; but they are secure in completely mastering a short, well-defined introduction. This text was written to proVide a brief, one-semester introduction to partial differential equations.