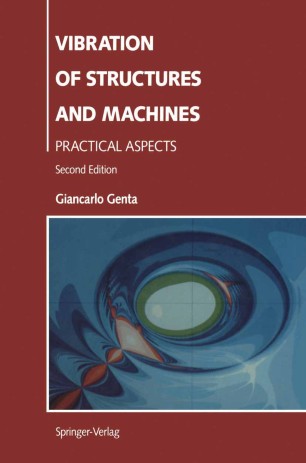 Vibration of Structures and Machines

This second edition follows the previous one after about two years. Apart from correcting a number of printing errors, few additions have been introduced. In the chapter on the finite element method, a short summary on finite elements in time (four-dimensional finite elements) has been introduced. In the chapter on rotordynamics, two new graphical representations are used; namely, the roots locus plot for free whirling and a tri-dimensional plot for the forced response for which the designation of "orbital tubes" has been proposed. The former has been borrowed from controlled systems dynamics, where it is widely used, while the latter is made practical by the availability of powerful graphical tools for postprocessing numerical or experimental results. As a last point, a more detailed description of the behaviour of magnetic bearings has been introduced in Chapter 6. Torino, September 1994 G. Genta Preface The present book originates from the need felt by the author to give a systematic form to the contents of the lectures he gives to mechanical and aeronautical engineering students of the Technical University (Politecnico) of Torino, within the frames of the courses of Principles and Methodologies of Mechanical Design and Construction of Aircraft Engines. Its main aim is that of summarizing the funda­ mentals of mechanics of vibrations to give the needed theoretical background to the engineer who has to deal with vibration analysis and to show a number of design applications of the theory.