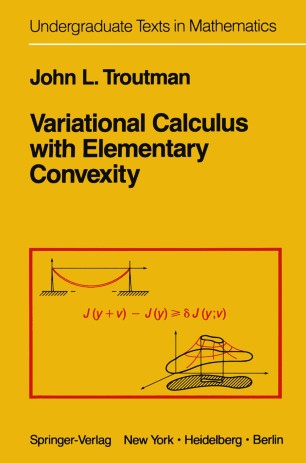 The calculus of variations, whose origins can be traced to the works of Aristotle and Zenodoros, is now Ii vast repository supplying fundamental tools of exploration not only to the mathematician, but-as evidenced by current literature-also to those in most branches of science in which mathematics is applied. (Indeed, the macroscopic statements afforded by variational principles may provide the only valid mathematical formulation of many physical laws. ) As such, it retains the spirit of natural philosophy common to most mathematical investigations prior to this century. How­ ever, it is a discipline in which a single symbol (b) has at times been assigned almost mystical powers of operation and discernment, not readily subsumed into the formal structures of modern mathematics. And it is a field for which it is generally supposed that most questions motivating interest in the subject will probably not be answerable at the introductory level of their formulation. In earlier articles,1,2 it was shown through several examples that a complete characterization of the solution of optimization problems may be available by elementary methods, and it is the purpose of this work to explore further the convexity which underlay these individual successes in the context of a full introductory treatment of the theory of the variational calculus. The required convexity is that determined through Gateaux variations, which can be defined in any real linear space and which provide an unambiguous foundation for the theory.