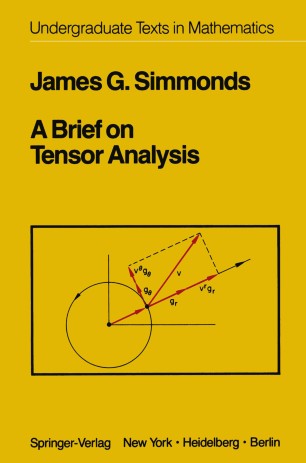 When I was an undergraduate, working as a co-op student at North American Aviation, I tried to learn something about tensors. In the Aeronautical En­ gineering Department at MIT, I had just finished an introductory course in classical mechanics that so impressed me that to this day I cannot watch a plane in flight-especially in a tum-without imaging it bristling with vec­ tors. Near the end of the course the professor showed that, if an airplane is treated as a rigid body, there arises a mysterious collection of rather simple­ looking integrals called the components of the moment of inertia tensor. Tensor-what power those two syllables seemed to resonate. I had heard the word once before, in an aside by a graduate instructor to the cognoscenti in the front row of a course in strength of materials. "What the book calls stress is actually a tensor. . . ." With my interest twice piqued and with time off from fighting the brush­ fires of a demanding curriculum, I was ready for my first serious effort at self­ instruction. In Los Angeles, after several tries, I found a store with a book on tensor analysis. In my mind I had rehearsed the scene in which a graduate stu­ dent or professor, spying me there, would shout, "You're an undergraduate.