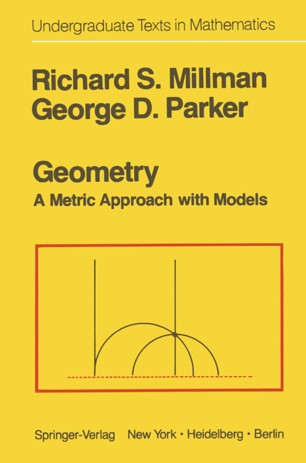 A Metric Approach with Models

This book is intended as a first rigorous course in geometry. As the title indicates, we have adopted Birkhoff's metric approach (i.e., through use of real numbers) rather than Hilbert's synthetic approach to the subject. Throughout the text we illustrate the various axioms, definitions, and theorems with models ranging from the familiar Cartesian plane to the Poincare upper half plane, the Taxicab plane, and the Moulton plane. We hope that through an intimate acquaintance with examples (and a model is just an example), the reader will obtain a real feeling and intuition for non­ Euclidean (and in particular, hyperbolic) geometry. From a pedagogical viewpoint this approach has the advantage of reducing the reader's tendency to reason from a picture. In addition, our students have found the strange new world of the non-Euclidean geometries both interesting and exciting. Our basic approach is to introduce and develop the various axioms slowly, and then, in a departure from other texts, illustrate major definitions and axioms with two or three models. This has the twin advantages of showing the richness of the concept being discussed and of enabling the reader to picture the idea more clearly. Furthermore, encountering models which do not satisfy the axiom being introduced or the hypothesis of the theorem being proved often sheds more light on the relevant concept than a myriad of cases which do.