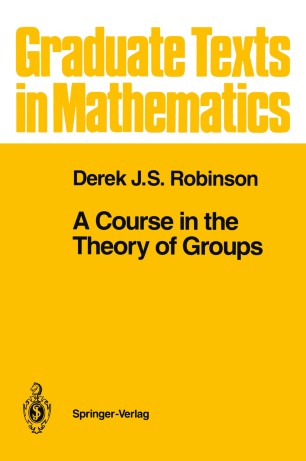 A Course in the Theory of Groups

" A group is defined by means of the laws of combinations of its symbols," according to a celebrated dictum of Cayley. And this is probably still as good a one-line explanation as any. The concept of a group is surely one of the central ideas of mathematics. Certainly there are a few branches of that science in which groups are not employed implicitly or explicitly. Nor is the use of groups confined to pure mathematics. Quantum theory, molecular and atomic structure, and crystallography are just a few of the areas of science in which the idea of a group as a measure of symmetry has played an important part. The theory of groups is the oldest branch of modern algebra. Its origins are to be found in the work of Joseph Louis Lagrange (1736-1813), Paulo Ruffini (1765-1822), and Evariste Galois (1811-1832) on the theory of algebraic equations. Their groups consisted of permutations of the variables or of the roots of polynomials, and indeed for much of the nineteenth century all groups were finite permutation groups. Nevertheless many of the fundamental ideas of group theory were introduced by these early workers and their successors, Augustin Louis Cauchy (1789-1857), Ludwig Sylow (1832-1918), Camille Jordan (1838-1922) among others. The concept of an abstract group is clearly recognizable in the work of Arthur Cayley (1821-1895) but it did not really win widespread acceptance until Walther von Dyck (1856-1934) introduced presentations of groups.