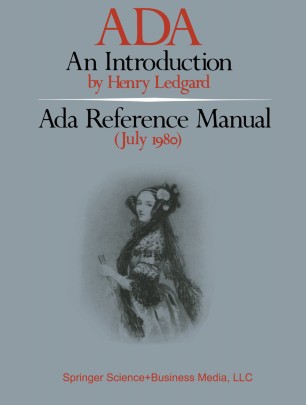 If Charles Babbage is to be regarded as the father of modern day computer technology, then surely the Countess Augusta Ada Lovelace, after whom this new language is named, must be remembered as its midwife. It was she, the daughter of England's poet Lord Byron, who translated the work of the Italian mathematician L.F. Menabrea, attaching her own scientific commentaries on the dissimilarities between the difference engine and .the analytical engine. It was Lady Lovelace, the great lady of computers, who delivered the notes and loosely organized writings of Babbage, with her own invaluable amendments, to a world not quite ready to receive them. The Ada language effort has employed hundreds, if not thousands, of minds and a healthy sum of money since its conception. Ada was fostered by the High Order Language Working Group (HOLWG), chartered by the U.S. Department of Defense in January of 1975 with the overall objective of developing a systematic approach to improved use of software by the military. One would think the Pentagon an unlikely foster parent for a new computer language. Regardless of its lineage, the question that begs asking is, of course-Why? The answer is by no means a simple one, but some brief background may help to clarify the matter. At present, the Department of Defense is the largest software consumer on earth, employing roughly 400 different computer languages and dialects. The situation, some have commented, is at best untidy.