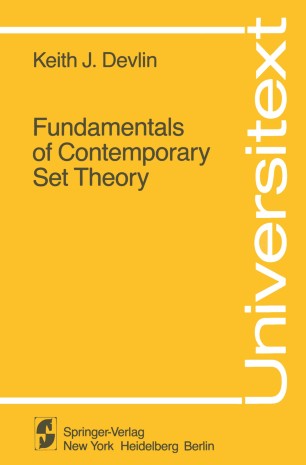 This book is intended to provide an account of those parts of contemporary set theory which are of direct relevance to other areas of pure mathematics. The intended reader is either an advanced level undergraduate, or a beginning graduate student in mathematics, or else an accomplished mathematician who desires or needs a familiarity with modern set theory. The book is written in a fairly easy going style, with a minimum of formalism (a format characteristic of contemporary set theory) • In Chapter I the basic principles of set theory are developed in a "naive" tl manner. Here the notions of "set I II union " , "intersection", "power set" I "relation" I "function" etc. are defined and discussed. One assumption in writing this chapter has been that whereas the reader may have met all of these concepts before, and be familiar with their usage, he may not have considered the various notions as forming part of the continuous development of a pure subject (namely set theory) • Consequently, our development is at the same time rigorous and fast. Chapter II develops the theory of sets proper. Starting with the naive set theory of Chapter I, we begin by asking the question "What is a set?" Attempts to give a rLgorous answer lead naturally to the axioms of set theory introduced by Zermelo and Fraenkel, which is the system taken as basic in this book.