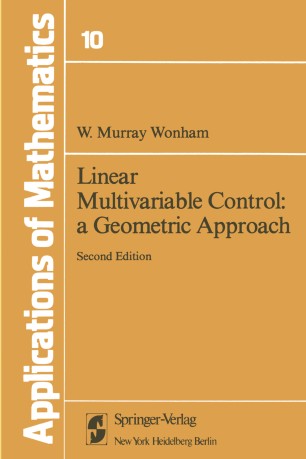 Part of the Applications of Mathematics book series (SMAP, volume 10)

In writing this monograph my aim has been to present a "geometric" approach to the structural synthesis of multivariable control systems that are linear, time-invariant and of finite dynamic order. The book is addressed to graduate students specializing in control, to engineering scientists engaged in control systems research and development, and to mathemati­ cians with some previous acquaintance with control problems. The present edition of this book is a revision of the preliminary version, published in 1974 as a Springer-Verlag "Lecture Notes" volume; and some of the remarks to follow are repeated from the original preface. The label "geometric" in the title is applied for several reasons. First and obviously, the setting is linear state space and the mathematics chiefly linear algebra in abstract (geometric) style. The basic ideas are the familiar system concepts of controllability and observability, thought of as geometric properties of distinguished state subspaces. Indeed, the geometry was first brought in out of revulsion against the orgy of matrix manipulation which linear control theory mainly consisted of, not so long ago. But secondly and of greater interest, the geometric setting rather quickly suggested new methods of attacking synthesis which have proved to be intuitive and econo­ mical; they are also easily reduced to matrix arithmetic as soon as you want to compute.