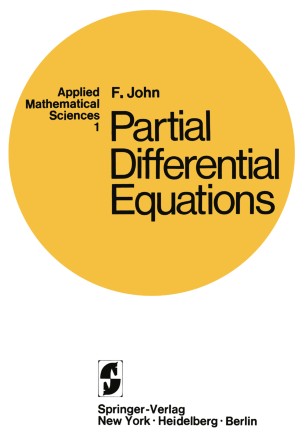 These Notes grew out of a course given by the author in 1952-53. Though the field of Partial Differential Equations has changed considerably since those days, particularly under the impact of methods taken from Functional Analysis, the author feels that the introductory material offered here still is basic for an understanding of the subject. It supplies the necessary intuitive foundation which motivates and anticipates abstract formulations of the questions and relates them to the description of natual phenomena. In the present edition, only minor corrections have been made in the text. An Index and up-to-date listing of books recommended for further study have been added. Fritz John New York November 19, 1970 v TABLE OF CONTENTS Introduetion 1 CHAPl'ER I - TEE SINGLE FIRST ORDER EQUATION 1. The linear and quasi-linear equations. 6 The general first order equation for a funetion 2. of two variables. • • • • • • • • • 15 The general first order equation for a funetion 3. of n independent variables. • • • • • 37 CHAPl'ER II - TEE CAUCIIT PROBLEM FOR HIGEER ORDER EQUATIONS 1. Analytie funetions of several real variables • Formulation of the Cauehy problem. The not ion 2. of eharaeteristies. • • • 54 3. The Cauehy problem for the general non-linear equation. 71 4. The Cauehy-Kowalewsky theorem. 76 CHAPl'ER 111 - SECOND ORDER EQUATIONS WITH CONSTANT COEFFICIENTS 1. Equations in two independent variables.