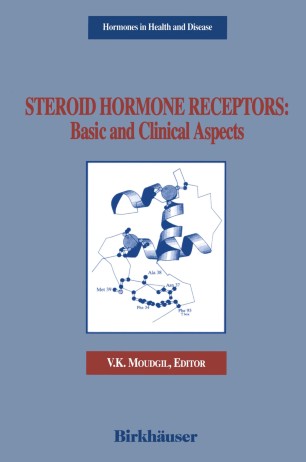 Part of the Hormones in Health and Disease book series (HHD)

The past few years have witnessed the emergence of steroid hormones as the wonder molecules which generate as much discussion in the scientific literature as they do in a typical living room. This transition has been a result of the tremendous public and scientific interest in the normal functioning of the hor­ mones as well their suggested involvement in several clinical conditions. In the recent past, notable scientific and technological advances have been made in the areas of contraception and regulation of fertility. Steroid receptors are the indis­ pensable mediators of hormonal responses and are complex protein molecules which appear to exist in association with other, yet undefined, proteins and/or factors. Receptors for vitamin D, retinoic acid and the thyroid hormones share structural similarities with steroid receptors, and the roster of this superfamily is still expanding. While our knowledge of the diversity and magnitude of steroid effects has advanced, the precise mode of steroid hormone action has alluded investigators. This volume brings together an international team of prominent investigators who discuss their most recent work on the basic and clinical aspects of steroid/nuclear receptors. The contributions represent updated versions of the invited presentations made at The Second Meadow Brook Conference on Steroid Receptors in Health and Disease. I am grateful to my colleagues on the Scientific Committee: Etienne Baulieu, Jack Gorski, Benita Katzenellenbogen, David Toft and James WittJiff, who provided the vision and guidance in formulating an out­ standing program.