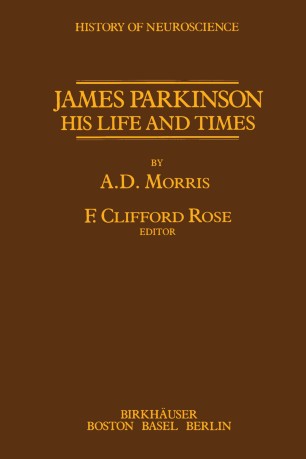 James Parkinson His Life and Times

Part of the History of Neuroscience book series (HINEU)

Dr. A. D. Morris had a long interest in, and great familiarity with, the life and times of James Parkinson (1755-1824). He was an avid collector of material related to Parkinson, some of which he communicated to medi· cal and historical groups, and which he also incorporated into publica· tions, especially his admirable work, The Hoxton Madhouses. When Dr. Morris died, in 1980, he left behind a large typescript devoted to Parkinson's life. It was single·minded in its dedication to primary texts, quoting liberally from the whole range of Parkinson's writings. This was particularly valuable since so many of Parkinson's publications were tracts, pamphlets, or occasional pieces which are now very scarce. A copy of the entire manuscript has been deposited in the Library of the Well· come Institute for the History of Medicine in London, where it may be consulted. The length of the manuscript made publication of the whole impossible, especially since it would have had to include the facsimile reproduction of Morris's The Hoxton Madhouses.