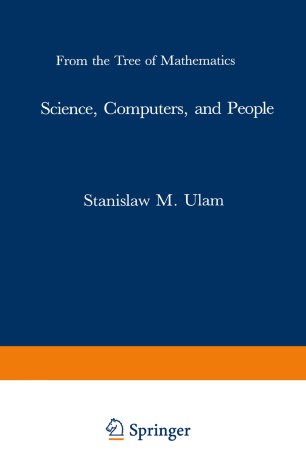 From the Tree of Mathematics

STANISLAW MARCIN ULAM, or Stan as his friends called him, was one of those great creative mathematicians whose interests ranged not only over all fields of mathematics, but over the physical and biological sciences as well. Like his good friend "Johnny" von Neumann, and unlike so many of his peers, Ulam is unclassifiable as a pure or applied mathematician. He never ceased to find as much beauty and excitement in the applications of mathematics as in working in those rarefied regions where there is a total un­ concern with practical problems. In his Adventures of a Mathematician Ulam recalls playing on an oriental carpet when he was four. The curious patterns fascinated him. When his father smiled, Ulam remembers thinking: "He smiles because he thinks I am childish, but I know these are curious patterns. I know something my father does not know." The incident goes to the heart of Ulam's genius. He could see quickly, in flashes of brilliant insight, curious patterns that other mathematicians could not see. "I am the type that likes to start new things rather than improve or elaborate," he wrote. "I cannot claim that I know much of the technical material of mathematics.