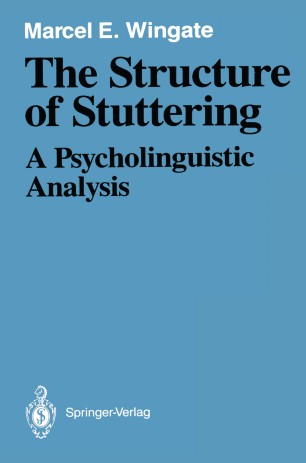 The Structure of Stuttering

This book was not written for any particular audience; generally speaking, I believe its contents should be substantive for anyone who has an interest in the nature of normal language processes and their dysfunction. None­ theless, in writing the book I have had in mind that its contents will be of special interest and value to persons in several disciplines, most notably certain areas of psychology and linguistics, and especially where those in­ terests overlap. It should also be worthwhile to individuals involved in what has come to be known as neurolinguistics, and, of course, to persons having a particular interest in the disorder of stuttering. More has been written about stuttering than all the other speech disor­ ders combined, yet it has remained an enigma. In my view the major source of the continued failure to isolate the nature of stuttering lies in the matter of the questions asked about it. It is not simply that they were not the right questions, but rather that there have actually been so few bona fide questions! Too much of what has been written and said about stutter­ ing has come in the form of declarative statement, which typically reflects some guiding concept and assumption(s). Moreover, most of what has passed as questions has been of a similar nature.